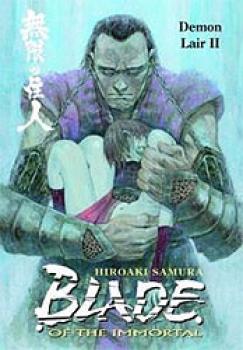 A prisoner subjected to Habaki Kagimura and crazy Doc Burando's twisted experiments for far too long, Manji finds himself closer to freedom than ever before-but several colorful villains block his way! While the shogun's executioner matches Manji and Da's skills, the reborn, powerful Isaku struggles with Asaemon and Kagimura's henchmen. The breakout battle in the tunnels beneath Edo Castle continues! With plenty of mortal enemies to go around, Manji and company are surprised by the appearance of Burando's most horrific kessen-chu success story, just as the already treacherous tunnels begin to flood. Rin tries to remain hopeful, Burando faces the reality of his "immortality experiments" on Manji, and a monstrous villain makes a return appearance!