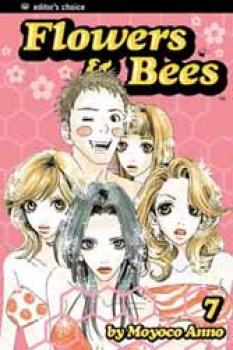 Andere artikels in Flowers and bees manga US

He's been seduced by a housewife, dissed in a love hotel, and molested with a rubber novelty. He's been tutored in the ways of romance by a pair of sadomasochistic beauticians and a thrice-divorced construction worker. He's been baptized in the waters of the Sea of Japan and burned in an unfortunate hair-bleaching accident. But now that Komatsu is dating Sakura, his dream girl, he shouldn't have anything worrying his bald, scabby little head...yeah, right! Still plagued by anxiety and self-doubt, Komatsu suspects that Sakura has a wandering eye and sets her free to romp in greener pastures. Crushed, Komatsu seeks solace in the arms of another, but he discovers that, far from the player he once aspired to be, he is a one-woman man at heart. Will he win back his ladylove? Will the Devil Sisters actually help him in his quest? How will Komatsu's saga of suffering end?