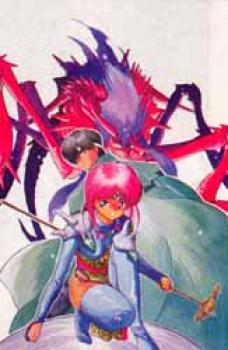 NOW PUBLISHED IN JAPANESE MANGA FORMAT! Finally!! After years of publishing chapter after chapter of 3x3 Eyes, and exciting epic of over thirty volumes, Dark Horse Comics will begin publishing the story of the mystical sanjiyan Pai, and her shy protector Yakumo, as it originally appeared in Japan. Follow our heroes as they continue their long journey to turn Pai into a human and restore Yakumo to his former mortal self. And of course it will be no short feat. Published for the first time in non-Westernized format, 3x3 Eyes will remain unflopped, be published right-to-left, and the fx will remain un-retouched (with small translated fx printed on or near existing fx.). Get ready for an exciting new era in 3x3 Eyes. A lot more, a lot sooner, a lot to love.