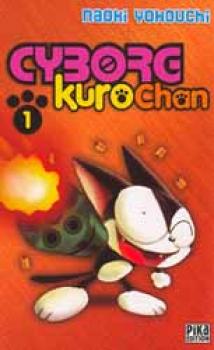 Cyborg Kuro-chan is supposed to be a madcap comedy about cats, robots and massive destruction. Which sounds like a premise that can't go wrong, but the manga has been awfully lifeless so far. Even in this first volume, the stories quickly settle into a tiresome routine. Pretty much each story involves Kuro-chan's elderly owners going to some locale or other (a shopping mall, a jungle safari) while Kuro-chan tangles with some bizarre robot, causing lots of collateral damage. Kuro-chan vanquishes the nasties with his amazing robot powers, and the old couple remains blissfully unaware of this as they're too busy raptly gawking at something or other. Unfortunately, rapt gawking, robots and collateral damage alone do not make for side-splitting hilarity. Kuro-chan's antics are manic and gleefully destructive just for the heck of it, as if the author assumes that things'll automatically become funny if they're just manic enough. It never rises above tepid amusement, however. I think I got one mild chuckle out of the whole book, with the rest being completely forgettable. Couple that with art that looks like it was drawn by your kid brother, and you have one very unimpressive whole. Only the very young or the very easily amused are likely to enjoy Cyborg Kuro-chan. And even for them, there are far better manga to get their comedy fix from.