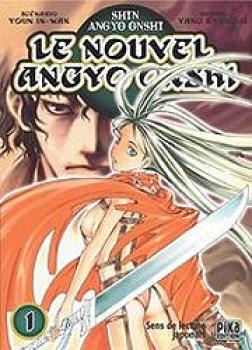 This is a pretty damn cool manga. It's based on a Korean legend about the so called Angyo Onshi which were some special agents/saviours of the people in ancient Korea but in the story there are almost none left, except for the main character of this story...
This manga has a lot of stylish action. And like in Kyung-Il Yang's other work, the art is amazing. And that's also one of the reasons I tried out this title. You get all that plus a really interesting story.

This manga was made by In-Wan Youn (story) and Kyung-Il Yang (art). Now, these authors are both Korean and have other manhwa (Korean manga) titles like 'Island' but this is their first title that is focused on the Japanese market.
That means that this title came out in Japanese originally and reads the Japanese way (right to left). Even though the authors are Korean, this title is just like other manga from Japan. It also seems to be quite popular in Japan. It's one of the few manga made by non-Japanese authors that is received well.

This french volume is also quite nice. It has a slipcover and the first few pages are in colour. There are also some notes from the author and some history of the Angyo Onshi.