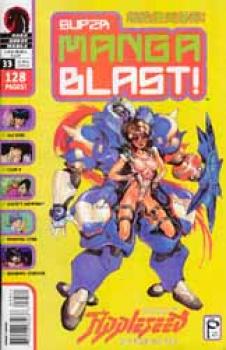 Bizarre science fiction and teen angst collide in Shadow Star. Sexy thrills and extraterrestrial mysteries abound in Seraphic Feather. 3x3 Eyes explores the connection between true love and mystical artifacts. Uncover the secret desires of house cats and college girls in Makoto Kobayashi's What's Michael? and Club 9. And don't forget the high-velocity, futuristic action of Appleseed Hypernotes, brought to you by Masamune Shirow, creator of Ghost in the Shell! Super Manga Blast! is 128 pages of the greatest science fiction, fantasy, drama, and situational comedy the world of comics has to offer, all contained in one tight, cool-looking package for a mere $5.99! If you're not reading Super Manga Blast!, it's not too late to save what little dignity you have left and pick up a copy this June!