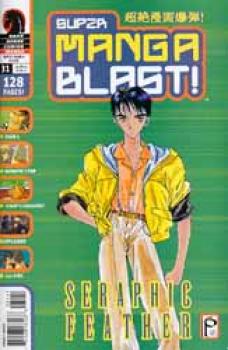 We're still rolling out the best manga in America! Manga like Shadow Star which is entering its fifth fantastic volume by introducing new characters, and bringing Akira face-to-face with the evil dragon empath, Satomi Ozawa. And the mystery continues to slowly unravel and tie itself back up in Seraphic Feather where we'll learn a bit about the past while recovering from the explosive battle against the cold-as-ice Apep Heidemann. And speaking of battles, the quest to the sacred land has found Yakumo, Pai, and Jake in one heck of a spat. What's worse, now Yakumo has to face the incredibly formidable wu of the Kaiyan Wang. On the lighter side, "Hello"-chan is having a good time driving her pink Testarossa around town and partying down with manga artists, not a bad life, eh. But something has to go wrong. Count on it. Finally, we've got EVEN MORE APPLESEED HYPERNOTES to give you that Shirow fix you need for the month. We've got all of that stuff packed into 128 bursting pages. Come and get some!