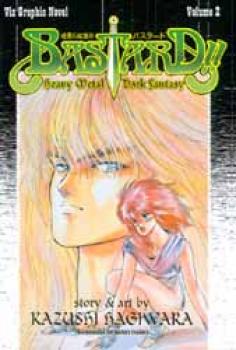 A generation ago, an evil wizard and his four diabolical generals swept across the land, leaving destruction in his wake until he was slain by the legendary Dragon Knight. Fifteen years later, the kingdom of Metallicana finds themselves under attack by the armies of the surviving generals, now known as the Four Divine Kings, servants of the dark god Anthrasax. With nowhere else to turn, the desperate defenders turn to a legend that a virgin's kiss may awaken the longdead wizard himself: "Dark Schneider," once the most feared man in existence, now (more or less) serving the forces of good...

Tia Noto Yoko, the only one who can control Dark Schneider, has been captured by the Dark Rebel Armies! After making their way trough a perilous dungeon, D.S. and Princess Sheila face the wizard's old ally Ninja Master Gara in a duel that pits sword against magic! Far away, news of D.S.'s resurrection reaches the long ears of Arches Nei, the elven sorceress who was once his pupil and lover - and now commands an army of her own. Remembering past injustices at the hands of the egomaniacal (and two-timing) magic-user, she sends her deadliest assassins to bring her Dark Schneider's severed head!

Kazushi Hagiwara's hit heavy metal and RPG-influenced manga Bastard!! has inspired fierce devotion - as well as action figures, video games and a six-volume anime series - since its Japanese debut in 1988. Now, the fan favorite series is available in English for the first time!