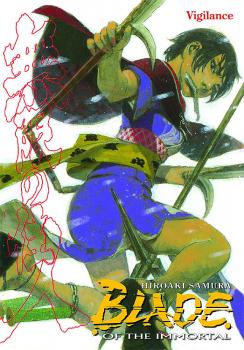 The penultimate volume in the long-running series! A sleepy port town becomes the scene of slaughter and frantic, final battles, as disgraced Edo officer Habaki faces the man he's vowed to take down-the rascally Anotsu. While Manga and Rin are forced to battle Habaki's most tenacious Rokki-dan thug, the enigmatic Makie has to fend off several Edo Castle henchmen at once! Blade's grotesque, vicious final battle rages on! Blade of the Immortal has won many awards across the globe, including the Eisner Award in America, the prestigious Media Arts Award of Japan, and multiple British Eagle Awards