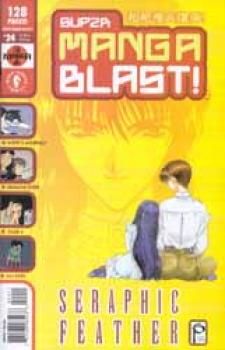 Super Manga Blast!, the premier publication with the meatiest manga offers up more of what you love, featuring five fantastic titles by four diverse draftsmen. First up this month , it's a slaughterhouse in "Seraphic Feather"! M-Zak and the U.N. SWAT team invading Apep's laboratory are in pitched battle with the aliens, it's no contest. Can M-Zak hold back the creatures long enough for the SWAT teams to evacuate? In "Shadow Star," the story is really heating up. Akira's been kidnapped, the bad shadow dragon kids are gathering to plan something against the Japanese Self-Defense Force, and it's Shiina to the rescue! In "What's Michael?", the toughest cat in town has an attitude adjustment. In "Club 9," Haruo's boyfriend's fave pitcher is about to break down in the middle of a potentially record-breaking season. It might take a little help from Haruo to get him back on track, and in "3x3 Eyes," Pai and Yakumo seem to be close to the keys of the sacred land, finding themselves at an old and secret temple, but evil corrupts, and there's plenty of it sliding around those parts. Get ready for more action, suspense, and silliness in the next issue of Super Manga Blast!, where we've got something for every manga lover. Super Manga Blast! scoops up more new readers every month! Get on board the manga train! Get ready for never-before-published Shirow works in Super Manga Blast!, coming soon!!