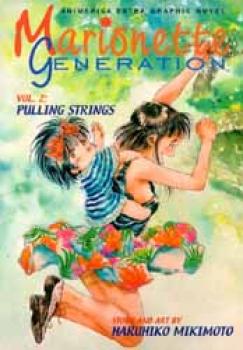 The quirky, beautifully drawn romantic comedy by Animerica Extra's popular anime character designer Haruhiko Mikimoto (Robotech, Gundam 0080: War in the Pocket)! One morning, illustrator Izumi Morino awakens to find himself in bed with a curious rag doll named Lunch who has special powers! Is she really alive, or just a schism of space/time? An old flame of Izumi's, Kozue, decides to crash at Izumi's apartment, much to Kinoko's irritation! With Kozue staying at Izumi's apartment, can Lunch pretend that she's just an ordinary inanimate doll? The mystery behind the origin of Lunch and her powers keep Izumi awake all night.