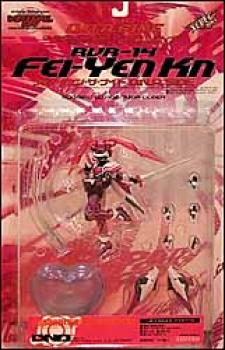 Imported from Japan! From Cybertroopers: Virtual On, the sequel to Virtual On, the smash-hit arcade game of robotic combat, comes this all-new series of impressively designed and articulated robot action figures! If you are a fan of video games, robots, or just cool toys, these are it! The most articulated video game-based toys ever you think of the pose and they can do it! Choose from: Fei Yen (29 points of articulation) a female-patterned mech featuring an armored mini-skirt, metallic pigtails, three sets of optional hands, removable boosters, and a cybersword.Temjin (31 points of articulation) a male-patterned mech featuring four sets of optional hands, a cybersword, and scabbard. Both robots are available in Player 1 (RNA Side) and Player 2 (DNA Side) versions! Original Japanese packaging.