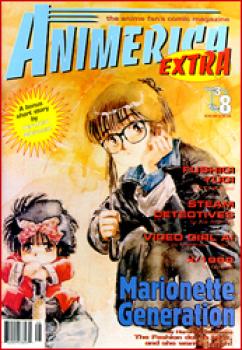 Whatever your favorite genre, whatever your style, get the best manga every month in Animerica Extra! Each issue features gorgeous fantasy, romantic comedy, science fiction, and more. Plus, fan art, letters, and articles on import manga and anime. This issue includes an in-depth look at the manga Ghost Sweeper Mikami! &quotVideo Girl Ai&quot: Fast forward It&#39;s Spring, the new school year has started, and Yota has been held back a year - putting him among a new class of underclassmen. Is Ai gone? And who is the new girl, Nobuko? &quotMarionette Generation&quot: Lunch the puppet is leashed to a tree and confronted by her worst nightmare! Plus &quotThe Princess of the Fall,&quot a short story by Haruhiko Mikimoto. &quotFushigi Yûgi&quot: The crystal ball gives Miaka a new clue as to the Sixth Celestial Warrior. Meanwhile, Yui tries to seduce her prisoner Tamahome (because that&#39;s what former best friends are for). &quotSteam Detectives&quot: Narutaki&#39;s showdown with Don Death! &quotX/1999&quot: The dreamweaver Kanoe invades Kotori&#39;s psyche, while Subaru, the Seventh Seal enters the picture.