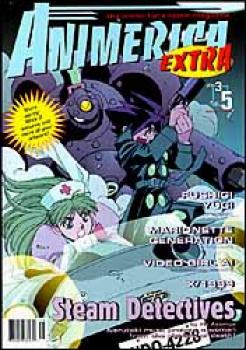 The best in manga based on the best in anime, now featuring marionette generation, by Macross character designer Haruhiko Mikimoto! Every 128-page issue of Animerica Extra contains anime news, import manga reviews, letters, fan art, and more. Plus, this issue will feature an announcement of Viz&#39;s next new manga. In this issue: Marionette Generation: Izumi, a manga artist, and Kinoko, his cute assistant, find that his house is now the home of a living marionette called... just what is its name, anyway? Fushigi Yûgi: Miaka, Tamahome, Chichiri and Hotohori go searching for the fifth Celestial Warrior. Video Girl Ai: Caught in an electrical field, Ai is dragged through the TV screen into the Video World! Yota follows her, hoping to save her from her maker. Steam Detectives: Before Narutaki can solve the case of the Grim Reaper-like murderer, the killer starts stalking lawyer Liza Fleischer! X/1999: In a blood-splattered hallway, Fuma and Kamui exchange words over the newly-born, still-warm sword which is destined to belong to one of them. Meanwhile, in her vision, Kotori grows angel&#39;s wings... but back in the real world waits a sight that could drive her insane.