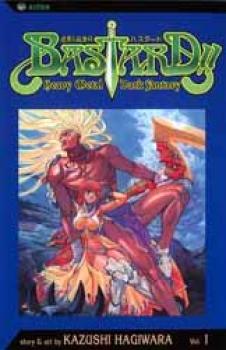 A generation ago, an evil wizard and his four cohorts swept across the land, leaving destruction in their wake. Fourteen years later, the kingdom of Metallicana again finds itself under attack. As their citadel is besieged, the desperate defenders turn to a legend that a virgin's kiss may awaken the spirit of the long dead wizard himself from within the body of a seemingly normal teenage boy! Dark Schneider, the chaotic, lecherous wizard, is back - only barely restrained by the demons, dragons and his own evil ex-allies awaits the reborn Dark Schneider... once the most feared man in existence, not (more or less) serving the forces of good...

I've read this series in french, so I can't say alot about the translations and editing.

Comparing with the volumes that will follow, the first volume is still quite innocent, normal-sized boobs, a few 'tastefull nude scenes', and a perverted sorcerer. The illustrations are detailed (but be prepared: they'll get sloppyer when the story advances!) and nice (less dynamic than the ones that will follow though). The first volume deserves 4 stars, but if I have to give points in general, it would be a 2star or 3stars, because of 3 elements:
1. the story is confusing and I think the mangaka haven't decently thought the plot out.
2. the blood and gore are great, but having stronger and stronger opponents (that DS will defeat) makes the story repeating itself (just how strong is DS???)
3. the mangaka is being unrespectful towards the readers, by not completing a story arc first (in V19 he goes to the next stage) with the weak promise to complete it later.

Good elements are
1. Ds being the anti-hero (forced by Youko to save the weak, whom his alter ego loves?)
2. A few laughs and absurd moments

I guess I'm being negative since I'm female. My brother loves this manga very much, so if you're male, don't let this review stop you. I guess it's just a 'male thing'.