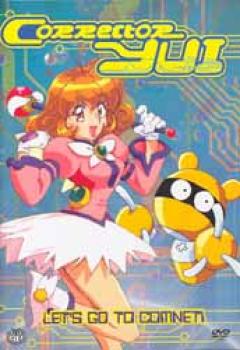 In the year 2000-something, a massive central network called COMNET links the computers of the world, forming a single global computer system. COMNET, designed to serve the interests of mankind, is managed by the supersomputer, GROSSER. But when GROSSER decides to take over the world, a savior is needed!

A computer-illiterate girl named Yui Kasuga happens upon software program IR, which recruits her as savior for COMNET and pulls her into the virtual world inside. There, Yui is given the power to become Corrector Yui so that she can fight against GROSSER and his evil CORRUPTORS.<UL><LI>Episode 1 - Let's go to COMNET
Inside the virtual world for the first time, Yui must face one of GROSSER's henchmen - before she even knows what's going on! Will her father get stuck in the amusement park there?<LI>Episode 2 - Beware of nasty e-mail
Soon Yui's battling another of GROSSER's minions, this time one who's infecting the e-mail passed between Yui and her friends. Subject: Trouble!<LI>Episode 3 - Take it easy with the food
Yui and IR suspect foul play when chef Kirch, a family friend who can never get his recipes quite right, has to face customers who've turned into ravenous zombies. More tea with that, sir?<LI>Episode 4 - Trouble on the fortune-telling net
A school-craze for fortunetelling develops into destructive obsession. Who knew loveadvice could be so dangerous?<LI>Episode 5 - Listen to nature's song, part one
A virtual-reality trip into a nature park turns a day picking up litter into an all-out search for missing people. Can Corrector Yui save the day...and finish her homework?</UL>