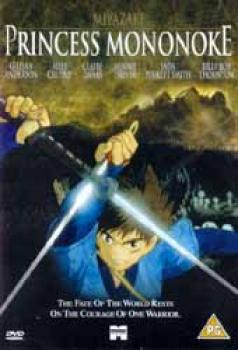 Claire Danes (The Mod Squad), Minnie Driver (Good Will Hunting) and Billy Bob Thornton (Armageddon, Sling Blade) head a cast of hot Hollywood stars who lend their talents to this exquisitely animated, highly acclaimed epic adventure. Inflicted with a deadly curse, a young warrior named Ashitaka (Billy Crudup - Without limits) sets out to the forests of the west in search of the cure that will save his life. Once there, he becomes inextricably entangled in a bitter battle that matches Lady Eboshi (Driver) and a proud clan of humans against the forest's animal gods... who are led by the brave Princess Mononoke (Danes), a young woman raised by wlves. Also starring Gillian Anderson (The X-files) and Jada Pinkett Smith (Scream 2), this monumental struggle between man and nature will have you transfixed with amazement as stunning artistry blends with wpic storytelling to create a uniquely entertaining motion picture.

From Miyazakis movies, this is the best!

I love forests and all those cute forest gods in this movie. Especially the spirits of trees were so lovely! The plot is very interesting, and language/vocabulary was easy to undestand even it wasn't my mother tongue..

Music was so great, that i had to buy the soundtrack afterwards. I crooned the ending song for a long time. The same happened when I saw the Spirited Away.

Despite its rather subdued theatrical release Mononoke-hime has come to relative prominence among foreign audiences. An extremely compelling tale with a strong environmental message, Mononoke stands out in my mind for its utter lack of &quot;evil&quot; characters. The various factions of man and nature are driven by their own realistic motives and while it's easy to pin some as &quot;bad&quot; it's not as simple as a cliched war between good and evil. The protagonist Ashitaka is pretty clearly good, but the distinction is nowhere near so clean for any of the other sides. This lends a immersive level of realism to what is otherwise a fantastical tale of a long-ago era. The movie is quite long at 133 minutes and the final arc stretches perhaps a bit longer than it needs to, but it is an enormously engrossing experience that can be watched and rewatched. Backed by animation above even Ghibli's exacting standards and a soundtrack i consider Hisaishi's finest, this is a story you cannot afford to miss.