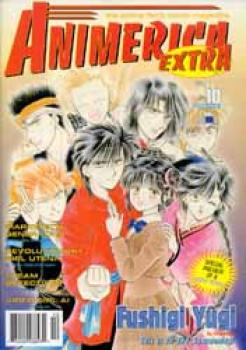 The greatest shojo and shonen manga! A brave young swordswoman who wants to be a prince; an artist, his kissin&#39; cousin, and a doll that came to life; adventure in a fantasy world not unlike ancient China; crime and mystery in the Gothic metropolis of Steam City; and a girl who came from a video tape. Features 128 pages of beautiful art and stunning stories, plus fan art, manga features and more! Fushigi Yugi: The summoning! Miyaka has gathered all seven celestial warriors and now is ready to summon Suzaku. But wait! Are the conditions as perfect as they seem? Marionette Generation: Izumi is getting fed up with Kinuko and Izumi&#39;s mind-meld. Then Izumi meets Kinuko&#39;s worst nightmare. Revolutionary Girl Utena: Utena manages to avoid Saionji and his deft swordsmanship at a student council party while at the same time she meets the rest of the Rose Council. Steam Detectives: Selena, a little girl from the streets, is admitted into Ling-Ling&#39;s hospital. Can Narutaki and Ling-Ling find the rare medicine to cure her before it&#39;s too late? Video Girl Ai: Noboku is having doubts about her relationship with Yota, but when he tries to prove his love, Ai gets in the way. Then, the luckless Matsui meets Ai&#39;s creator.