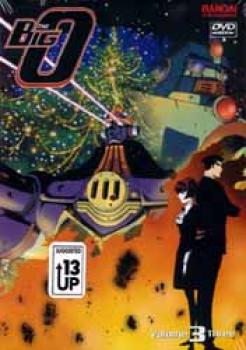 Life gets more and more interesting everyday for Paradigm City&#39;s top negotiator. But when Dorothy finds a stray cat and brings it home, an older couple shows up claiming to be the parents of the cat! The cat isn&#39;t really a cat at all, but a boy! When the cat is kidnapped, Roger and Dorothy soon learn that someone&#39;s been genetically engineering these creatures, and it&#39;s a race against time as they seek to rescue it before the kidnappers choose to dispose of the evidence permanently! Approximate running time: 75 minutes.

Part three already of the Big O Region 1 DVD volumes.
The relation between Dorothy and Roger is getting more attention and even Major Dastun proves to be not so hard as he looks like. Each episode starts out as a mystery, which Roger has to unravel and like previous episodes, the story is not too complicated. Also, at times the episodes seem a bit unbalanced: sometimes the pace is too quick or too slow. However, like I said before, it is compelling to see how each of the main characters gets attention of the creators in the form of memory shards .. However, you're still left almost in the dark about the main story which might suggest that the main story is not too deep or that the anime has an open ending .. Then again, who cares; At this point I was more interested in the relationship between Dorothy &amp; Roger and Roger &amp; Angel.

Basically, the same things I said about volume two also apply
to volume three. The animation is always top-notch: There's not a moment that I thought the animators were slacking off or whatever.The stories are amusing and heartbreaking at some points and it always kills me when I notice that there are no more episodes left on the disc. Can't wait for part 4 ..