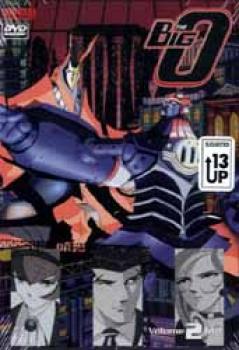 As Paradigm City&#39;s top negotiator, Roger Smith lives a very exciting, but dangerous life. When a series of accidents begin plaguing the city&#39;s police force, all clues point towards a &quot;ghost&quot;. Fed up with Dorothy&#39;s piano playing, Roger takes her to see his friend Instro, an android who is a very gifted concert pianist. However, can Roger protect the City from Instro&#39;s creator while keeping his identity as the pilot of the Big O a secret from the inquisitive Angel. Approximate running time: 75 minutes.

You gotta love this anime.. At first I was afraid that this anime
would become meaningless &amp; dull due to the fact that some episodes act as a stand-alone without showing any progress in the main story. Also, I got the idea that each episode has the same storyline: A person regains some memory of the past and puts it to use. In the end,
Roger &amp; The Big O usually have to clean up the mess.
All in all, the episodes are not complicated and sometimes a bit unbalanced This is for some part true but somehow each episode touches an emotional string within me. Maybe it's because of the way Dorothy tries to be more human-like. Or maybe because the story element of losing your past always
delivers a dramatic punch to each episode. Anyhow, the episodes seem to revolve more around the characters in the story instead of the fights between Big O and some gaint counterpart, which was actually the idea I got of how this anime would turn out to be .. And boy am I glad I was
wrong ..

You do have to understand that I don't consider this to be the
best anime I have ever seen. Some episodes do tend to go a little unnoticed sometimes. However, it somehow stands out of the crowd of mecha-based anime.

The only thing I really dislike about the DVD is that each DVD from now on only contains three episodes. Of course there is nothing to do about it once you're hooked .. And how can you not be when you this anime delivers you a hero who shouts 'Big O! Action!' everytime he calls for his favorite
Megadeus.