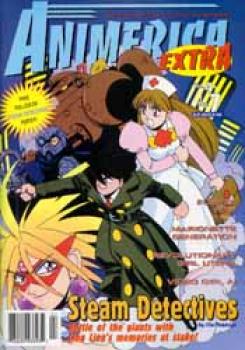 The greatest shojo and shonen manga! A brave young swordswoman who wants to be a prince-an artist, his kissin&#39; cousin, and a doll that came to life-adventure in a fantasy world not unlike ancient China-crime and mystery in the Gothic metropolis of Steam City-a girl who came from a video tape-and the psychic occultists who wage war over the fate of the world. Fushigi Yûgi Tai-Yi-Jun tells Miaka she must remain a virgin of she if to fulfill the quest before her. Then, Yui gains a new and powerful ally. Video Girl Ai: In the middle of an intimate moment, Yota is interrupted...by a phone call from Ai. Will Yota leave Nobuko alone to help Ai out? Steam Detectives: Narutaki is under attack by Dr. Guilty&#39;s Megamaton, Shadow Bolt III! Can the clue to defeating it be in Ling Ling&#39;s past? Doesn&#39;t the good doctor ever give up? Revolutionary Girl Utena: Against all odds, Utena has won the battle with Saionji! But can she possibly accept the prize-a girl named Anthy!? Marionette Generation: Izumi finds out how Kozue is doing, but returns to find everyone playing a very strange video game.