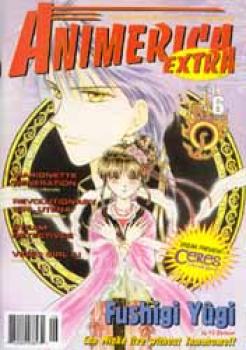 The greatest shojo and shonen manga! A brave young swordswoman who wants to be a prince; an artist, his kissin&#39; cousin, and a doll that came to life; adventure in a fantasy world not unlike ancient China; crime and mystery in the Gothic metropolis of Steam City; a girl who came from a video tape; and the psychic occultists who wage war over the fate of the world¿ its 128 pages of beautiful art and stunning stories, plus fan art, manga features and more! Fushigi Yûgi: Chichiri and Tasuki escape back to Hong-Nan finally, but Tamahome remains under Yui&#39;s spell. Will he ever be able to return as himself? Video Girl Ai: Nobuko and Yota hop into bed together, but do they really plan to go all the way? Steam Detectives: Ling Ling flees in terror as she is pursued by a Megamaton! Who else is behind this than the wily Dr. Guilty! X/1999: As her life slips away, Kotori says her final farewell to dream-walking Harbinger Kakyo. What message does she leave behind? Revolutionary Girl Utena: Utena faces the fencing master Sayonji in a match to the death! Let the steel fly! Marionette Generation: Lunch&#39;s origins are revealed! Is she really a live being or just a schism in space/time?