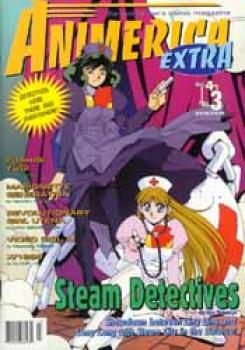 The greatest shôjo and shônen manga - 128 pages of beautiful art and stunning stories, plus fan art, manga features, and more! Revolutionary Girl Utena: Utena meets Wakoji, a designer who works with Utena&#39;s aunt. Can he be the prince who saved her six years ago? Video Girl Ai: &quotI am your creator,&quot the mysterious man in the trenchcoat says¿ and Ai, who has amnesia, doesn&#39;t know why she&#39;s afraid. Meanwhile, Nobuko decides to spend the night with Yota; Marionette Generation: Is Lunch just an animated marionette, or what? Why can she levitate and what are her other powers? Fushigi Yûgi: Captured by Nakago, Miaka hopes that her beloved Tamahome will save her¿ only to watch as he renounces her and kisses Yui! Steam Detectives: The final clue is &quotDeath!&quot Where is the last bomb? What&#39;s wrong with Ling Ling? Will Le Bread&#39;s evil scheme succeed? X/1999: The defining moment. Kamui makes his decision, and the consequences become painfully clear, as he is nailed down with giant glass splinters and Kotori is tied to a steel cross¿