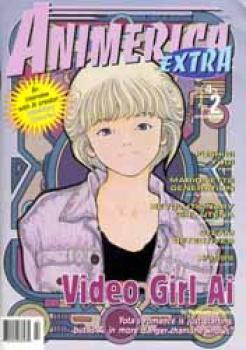 The Anime Fan's Comic Magazine! Each issue of Animerica Extra contains romance, fantasy, mystery, and science fiction stories from the artists who move the world of manga. Each issue features reviews and columns by the most informed manga authorities in the U.S. today. There are no other magazines that give you this kind of star power, this excitement, and are this devoted to doing manga and doing it right! In this issue: Revolutionary Girl Utena: Utena's aunt has hired a young man who looks exactly like Utena's prince. Can it be him? Video Girl Ai: Ai can't figure out why she can't get Yota out of her head, and why does her grandfather keep telling her never to touch the video recorder? Marionette Generation: Discover some clues about Lunch's special powers! Fushigi Yugi: Miaka goes back to Qu-Dong to see Yui and gets Tamahome back. But Tamahome has other ideas... Steam Detectives: With bombs scattered throughout the metropolis, time is running out for Steam City. And why does Ling Ling seem to be acting so strange? X/1999: Kamui goes to CLAMP Academy and, in a message left by the deceased Tomoko, learns more about the decision he must make.