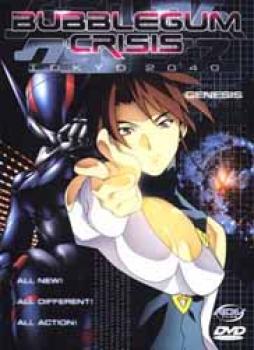 Other items in Bubblegum crisis Tokyo 2040 TV DVD US

In the after match of the great earthquake, one ruthless corporation stands ready to take over the devastated city of Tokyo with an army of synthetic monsters. Only one small band of female mercenaries is ready to stand against the monolithic power of Genom, but in this case four women is all it takes! Armed with the most incredible combat suits ever designed, the Knight Sabers wage a desperate war in the shadows combating the monstrous by-products of technology run amok with courage, sweat, and blood! It&#39;s a deadly trial by fire as the acclaimed cyberpunk masterpiece is reborn! <UL><LI>Audio: English, Japanese, and Spanish<LI>Subtitles: English <LI>Extra features: character profiles, and six featured ADV film trailers. <LI>Running time: 100 minutes<LI>Region: All</UL> 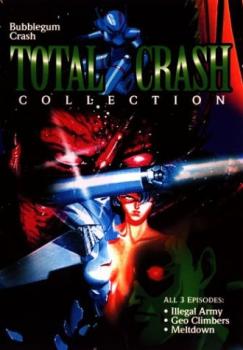 "Awesome series that predicts the future correctly" by NeoNizer (Nederland) on Jun 22, 2004

this is a prelude to the future, in a very realistic way
as this goes along the lines of genetic manipulation
and creation, and will surely be achieved in the future
namely, bio-mechanoids or boomers

in these episodes, we meet Linna Yamazaki,
a young, athletic girl which has a strong will
New in tokyo and dying to become a &quot;Knight Saber&quot;

now what is Knight Saber you ask?
mostly a woman who knows what needs to be done:
slaying the mad boomers that pop up from time to time,
with the help of their Hardsuits: armors with hi-tech sensors
and the necessary weapons to boot, and did i mention
superhuman strength, speed and agility?

since Linna is wanting to become one,
she tracks down Priss, singer and bitch extraordinaire..
or not?

in a chase and a test. Linna meets Nene, a hacker and a cop
thus mainly the intelligence Knight Saber
and Sylia the leader of the Knight Saber,
and daughter of the doctor who created the mysterious
boomers.

Linna finds out that being a Knight Saber isn't as easy as she thought it would be,
but proves she is worthy of being one
and thus begins the story of &quot;Knight Sabers&quot;