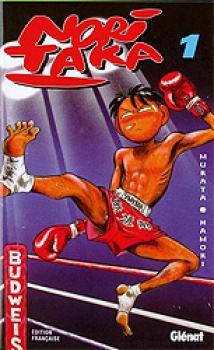 Noritaka starts out pretty strong. It's a bold mickey-take on the shonen sports genre with its penchant for ridiculous dramatics. And for the first few volumes, it works rather well. The gags, while far from sophisticated, are often riotously funny. There's even a pretty good underdog story beneath all the crass jokes and insane facial expressions. Our protagonist, Sawamura Noritaka, is a far cry from the typical hot-headed shonen hero. Instead, he's wimpy, dopey and almost completely lacking self-awareness. And he looks immensely silly to boot. All the same, he's been pushed in the underdog role all his life, so it's not hard to feel some sympathy for him, especially when his efforts with Thai boxing lead to great results.
For, like in every shonen sports title, he joins a school sports club in the name of blood, sweat, spirit and impressing pretty girls. Only in this manga, it's the run-down Thai boxing club that nobody ever bothered to notice before. The club's eccentric coach puts our hero through rigorous, and seemingly absurd training methods that end up paying off in unexpected ways. When wimpy little Noritake kicks down school bullies, it's not just a victory for him, but for the tiny Thai boxing club as well.
So far, so good. Unfortunately, the manga starts to drastically deflate after a few volumes. The story quickly settles into a very predictable pattern that just ends up repeating itself. Every few chapters, Noritaka encounters some huge, towering bully who excels at some martial art or other. Through sheer bad luck and stupidity, Noritaka manages to make a mortal enemy out of said bully. He is challenged to a fight. The coach puts him through bizarre training routines (from catching stray cats to dancing to MC Hammer). Noritaka triumphs against all odds in a long, tortous duel where the reasons behind the coach's strange training becomes clear. Lather, rinse, repeat. It's a sad sight when Noritaka becomes just as stale and formulaic as the very shonen sports titles it set out to parody in the first place. My advice is to try the first four volumes or so, if you're in the mood for a broad comedy. If you really, really enjoy those, what comes next is basically more of the same. Over and over again. For me, it was fun at first but the laughs quickly wore off after the first story arc.