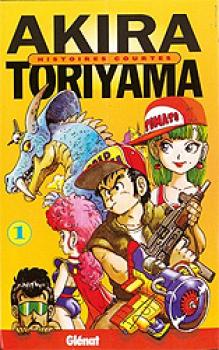 This book contains seven different short stories by Akira Toriyama. There is some continuity between a few of the stories, but most of them are purely standalone deals. Now, I never cared much for the look of Toriyama's character designs from the mid-nineties and onward. You know the sort of thing, that slightly angular, fat-faced Dragon Ball Z look which so often gets traced in bad fanart. However, his earlier art and stories had a sort of naive charm, which gets to work its magic throughout this book. The earliest story in this collection dates back from 1979. Apparently, this is all pre-Dr. Slump material, and most of it is very similiar to Dr.Slump's style of goofiness. It's all about cute, slightly chubby-looking characters engaging in silly adventures, usually involving lots of funky cartoon mechs and monsters. It's simple stuff, but it's fun in an undemanding way. I liked the myriad eighties pop culture references and the zany mecha creations that pepper the book. Some of the jokes even gave me a good, strong fit of hysterics. The stories all showcase a blend of very silly, cartoony humour, which is good for some solid chuckles. For its low asking price, this book is a nice way to sample a fresher Toriyama from before his comics grew stale and his character designs got clubbed with an ugly stick.