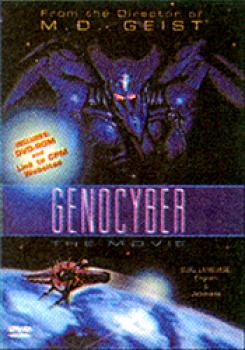 From the creator of M.D. Geist! Now on DVD-ROM! As the nations of the world begin to merge, world peace is threatened by the private armies of individual corporations. The Kuryu Group has just discovered a weapon that will tip world power in their favor. The Genocyber: a nightmarish combination of cybernetics and psychic potential. Battle erupts, and the cyberpunk world of the future is about to explode with violence! Bonus features include: &quotMeet the Cast&quot, Chapter stops, DVD sneak peaks. DVD-ROM features script, cast lists, and an extensive gallery including concept shetches, model photos, original ad final character designs, color backgrounds, color storyboards, and production cels.