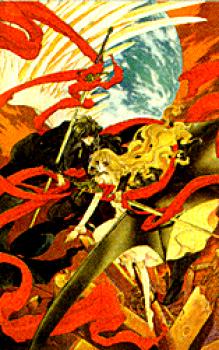 A lavish hardcover volume for the popular series X/1999 by the all-female artist group CLAMP. Presented in full-color, this collection features over 152 pieces of artwork which and will make a fine addition to any collector&#39;s bookshelf. Also includes explanatory notes and interviews.

Kadokawa Shoten has spared no expense with this artbook. It has been given the full deluxe treatment, and it shows on every page. The thick, black, leathery cover alone is a luxury that few anime/manga artbooks are blessed with. This is nothing like the glossy paperback album look that most artbooks have to settle for. The quality of the paper is also second to none. It's exceptionally rich, thick and glossy which makes for one heavy pack of around 170 pages. Needless to say, the illustrations contained within X Zero look absolutely crystal clear.

What about those illustrations, though? Despite the lavish production of this artbook, I have some issues with the actual content. Simply put, CLAMP's color illustrations for X can get pretty repetitive. One close-up of Kamui looks very much like another, and he absolutely dominates this book. Anyone who is familiar with Mokona Apapa's lush art may be pretty surprised at how unimaginative some of the illustrations in X Zero can be. We're used to rich, dynamic and colourful compositions from the artist, but her imagination dips into lazy moods here and there when it comes to X. Just sticking Kamui in front of a rather bland background and splashing some random occult symbols around works once, maybe twice, but gets downright boring after that. In one fairly large chunk of the book, we're treated to yet more bland shots of Kamui - only now, there's a matching illustration of Fuuma in exactly the same pose on the next page! Wow, two nearly identical illustrations right next to each other. Yeah, we get the whole thing about Kamui and Fuuma being each other's destined opposites, and the trick of them 'mirroring' each other on a lot of illustrations is nice, but it's used far too often in this book to remain interesting.

Thankfully, there is also a section with some excellent illustrations of the other Dragons besides Kamui and Fuuma. Later Kamui illustrations are also much more interesting than the ones early in the book, containing more varied and vivid compositions than just endless variations on Kamui posing in front of some religious icon. The later parts of the book is where the art really shines, and the tedium of the early Kamui illustrations can be forgiven. There are also some interesting attempts to mix some different styles into the illustrations. On some pages, the characters are drawn with rough, thick lines that suggest traditional Japanese paintings, whith some overtly Geiger-inspired illustrations or even illustrations that look like classic frescoes in there as well. It serves to break the flow of more traditional shojo art, and keeps things interesting, even when it's just more of Kamui and Fuuma standing around.

One minor quibble is that anyone who has been an active X fanatic for some time will already have seen a lot of the illustrations in this book on manga covers, pencil boards, title pages and the like. Rarely-seen illustrations aren't really abundant in X Zero, but it depends on the individual reader whether that'll be a disappointment or not. The book sets out to collect these illustrations and present them in spotless quality, and it does so just fine. It's interesting to see Mokona Apapa's style evolve subtly throughout these illustrations, as X Zero covers her work over a large span of time (from the first to the tenth volume of X - roughly from 1992 to 1997), during which her style has grown considerably more refined. You can easily tell the difference between smooth, recent illustrations and early X illustrations where the characters had somewhat more chubby, less expressive faces and the images as a whole just felt less accomplished.

Mokona Apapa has come a long way since X first started, and it already shows in X Zero that she just keeps getting better. If a second X artbook is ever made, I really hope the production values will be as luxurious as they've been for this book. The early Kamui-heavy portions of the book is fairly boring. There's no way around it. Even when there's a richly detailed illustration, or a more plain composition that is actually quite tasteful, I can't always be bothered to gawk at it for hours because, really, it's just Kamui and Fuuma posing over and over again (if you're a raving Kamui groupie that simply can't get enough of him, though, you¿ll feel like you've died and gone to heaven). But the slightly disappointing content ultimately does not mean that I'm unhappy about this purchase. It's a pricey book, but it has every right to be. It radiates richness, and it's a pleasure to handle such a beautifully made artbook. If you're serious enough about your X-mania, treat yourself to this big chunk of luxury. Go on, you know you enjoy being decadent from time to time.