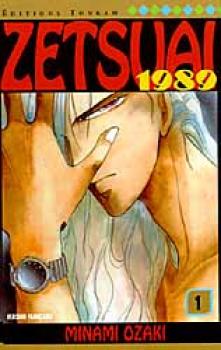 Other items in Zetsuai manga FR

Fans of angsty, troubled and tragic romance will be in seventh heaven with Zetsuai. To say that the two pretty protagonists of this manga have issues is an understatement. Whatever relationship blasé rock star Koji Nanjo and fiery soccer talent Takuto Izumi will build up, there are rocks, nay, mountains ahead. That Koji, an ostensibly straight male, feels deep turmoil at the thought that he's experiencing attraction to a man is but a side note in the stormy seas of angst that the characters brave.

In a nutshell, this is no ordinary, happy romance. Don't go in expecting anything remotely like that, or disappointment will follow. Once you get used to the idea that this isn't a cheerful boy-meets-boy story (and I do find myself a bit tired of the overdoses of angst and tragedy both in yaoi manga and in general gay fiction), it actually becomes fairly interesting when the pace picks up. I was left wanting more at the end of the first volume, and I just hope that subsequent volumes can keep up that act.

The first half of this volume crawls by at a snail's pace. It allows the atmosphere to sink in, and for the reader to get used to the art style and the page layout, both of which are pretty unusual. Sure, overly skinny, sharp-chinned men with bedroom eyes and mile-wide pectorals are fairly common in shojo and yaoi manga. But Minami Ozaki takes the typical yaoi look to the extreme. Her long-legged, waistless characters are undeniably elegant. But for every panel where the characters actually look good, there are panels where everyone looks sketchy, undetailed and where coherent anatomy seems to take a break from the manga. The page layout also takes some getting used to. I've read shojo manga with a very 'loose' sense of page layout before, but Zetsuai still took me by surprise. Dialogue and actions just seem to float around the pages. Panels or dividing lines sometimes go completely missing. It's hard to make sense of at first, but really enhances the atmosphere once you get used to it.

Back when Zetsuai was first released in French, the idea that a yaoi manga got translated at all was a big novelty (the 'action' in Zetsuai is extremely tame so far, barely one attempted male-male kiss - it's all developing very slowly). Things have changed by now. There are titles like Fake that offer lighthearted, happier romances, and which are infinitely more accesible to the average reader than Zetsuai. But if typical visual trappings of the yaoi genre and buckets of uncomfortable angst float your boat, you can't go wrong with Zetsuai. I can't unanimously recommend it, since it'll only really work with a select handful of readers, but so far, Zetsuai does its thing with style.