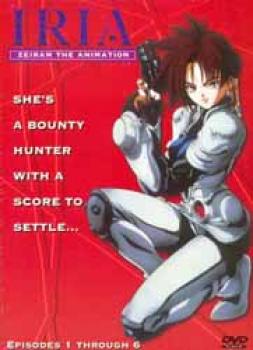 Contains all episodes 1-6! The entire Iria saga comes alive on a thrilling DVD. Join Iria as she battles it out with the mysterious and deadly monster, Zeiram. Volume 1, Iria, an apprentice bounty hunter, accompanies her brother and his boss on a mission to reduce a VIP and a mysterious cargo. Things turn deadly when it is discovered that the cargo is Zeiram. A mysterious corporation attempted to import this monster to use it as a new bio-weapon, and now it&#39;s loose! Only Iria, and her streetwise sidekick, Kei can halt the monster&#39;s rampage. Volume 2. On the run from a major conspiracy, someone&#39;s out to silence Iria before she can learn about the truth. All she knows is that she holds the key to exposing the Tedan Tippedai Corporation and their link to Zeiram. Volume 3. All hell breaks loose in the explosive finale to the series! Iria faces Zeiram in their final battle predator against predator and discovers the awful truth behind her brother&#39;s disappearance and her own connection to the monster. She has a dangerous plan to discover Zeiram&#39;s Achilles Heel, but will she be able to escape the authorities&#39; trap? <UL><LI>Audio: Japanese and English<LI>Subtitles: English<LI>Running time: 162 minutes<LI>Region: All</UL>