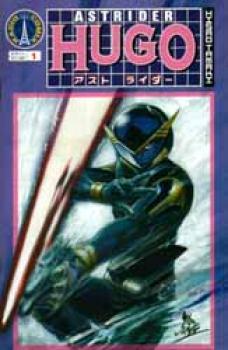 Radio Comix is thrilled to announce their latest translated manga - Astrider Hugo by Hisao Tamaki, the artist of the best-selling trade paperback of 1999: Star Wars: A New Hope manga! Hugo, a former pilot with the Federal Space Force, is now the most wanted criminal in the galaxy! His insane diversionary tactics during pirate raids have made him priority-number-one for Regina, a tough-as-nails Orbital Space Force agent who always gets her man! Suddenly, Hugo finds himself embroiled in a galaxy-wide conspiracy devised by the Federal Space Force! Can Hugo avoid the incessant pursuit of Regina and the OSF and unravel the webs of intrigue that are tightening around his fellow pirates, threatening their very existence? Gorgeous art and jaw-dropping science fiction action abound in Hisao Tamaki&#39;s first original material to be published in the U.S.! This issue also features an all-new fully-painted cover by Hisao Tamaki done exclusively for the American market!