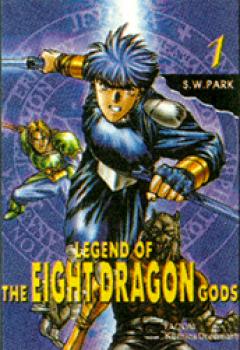 The ultimate clash between virtue and evil! It is believed that there are Eight Dragon Gods protecting our world. The Eight Dragon Gods of Virtue represent the eight basic elements of earth: water, mountain, thunder, wind, fire, soil, lake, and sky! It is also believed that one who seeks to rule the world must awaken the power of at least one of the Dragon Gods. So, in order to conquer the world, the emperor of the Dark Realm, Asura, seeks to awaken the sacred Eight Dragon Gods! In Volume One, Asura, finds the reincarnation of the Thunder Dragon God in the form of the sorcerer/warrior, Jin-ma, who has yet to realize that his soul is a pathway for Asura to retrieve the Thunder Dragon&#39;s power! When his master is taken hostage by Asura, Jin-ma must quickly realize his destiny and battle the evil sorcerer.