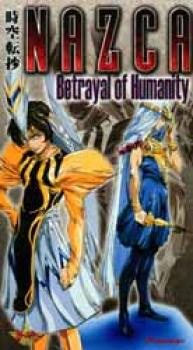 <center>Betrayal of Humanity</center>The survival of our future lies within the secrets of the ancient past.<UL><LI>Episode 7: Memory... Separate Ways<LI>Episode 8: The Promised land<LI>Episode 9: Light Chasing Darkness</UL>Kyoji and Tate are the reincarnated souls of the ancient Inca warriors. Once close friends, they are now bitter enemies in a war over the fate of humanity. In their last battle, Tate and his allies had released an ancient power called Iriyatesse, destroying an entire town and all of its inhabitants. Now Tate intends to do it again on a global scale. But Kyoji is determined to stop Tate, even if he must sacrifice his own life to do it. Standing between these two warriors is a mysterious and powerful Inca priest named Garos. Is he the key that Tate needs to release Iriyatesse? Or, does Garos have a hidden agenda that neither Kyoji or Tate can possibly fathom?