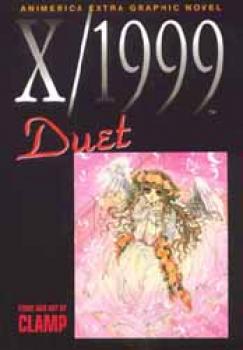 Apocalyptic fantasy by the four-woman artist team CLAMP, creators of Magic Knight Rayearth! This cryptic graphic novel brings together the X/1999 installments from Animerica Extra Vol. 2 #6- Vol. 2 #12. In this issue: Kamui is forced into a psychic duel with Zukamori Sakura, and worse still, his powerless childhood friend Kotori is also drawn into the fight! Meanwhile, Sora and Arashi comb the streets of Tokyo to find the rest of the Seven Seals, and a team of scientists unveil their genetically engineered psychic creation... who, unbeknownst to them, has already taken sides in the Battle of Armageddon. As Kamui&#39;s best friend Fuma starts uttering strange prophecies, the worst is still to come: Kamui&#39;s closest living relative Tokiko steps back into the picture, bearing a magical gift that will have grave consequences. Plus a Yuzuriha Nekoi side story!