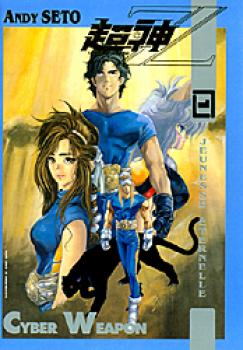 "Not an ideal introduction to Korean comics." by V. Krätke (Netherlands) on Jan 2, 2005

Cyber Weapon Z was one of the very first Korean comics to get translated in French, or indeed released outside of Asia at all. For all I know, there may be tons of undiscovered, highly talented comic artists on the Asian mainland. You wouldn't think so after reading Cyber Weapon Z, though. Sure, the full-colour art is very pretty, and a lot of care has obviously gone into this sturdy hardcover edition. However, for all its eye-pleasing, shelf-embellishing qualities, Cyber Weapon Z is little more than a bad manga pastiche. Even the name is a sorry echo of a Japanese title (apparently, this was intentional - the Z is only there to remind one of the then-dominant Dragonball Z craze).

The story and the characters are a hodgepodge of tired manga clichés. Cyber Weapon Z follows the exploits of some young students at an exclusive, high-tech martial arts institute, where a project to advance human evolution just *happens* to be going on, and a demon from several millenia ago just *happens* to be imprisoned. Our protagonists include Park Iro, who looks like Ray Amuro in a plugsuit and displays typical arrogant hot-headed youth behavior. Then there's Anling, the only woman in the cast and basically a stand-in for Street Fighter II's Chun-Li. She has no personality, she only needs the fact that she's a girl to distinguish herself from the pack. Finally, there's the aptly-named Loneken who is your typically stoic, mysterious figure, except he looks like Terry Bogard's long-lost cousin. And just when you think it can't get any more derivative, a battlin' catgirl in a minuscule loincloth shows up.

Cyber Weapon Z, volume 1 might as well be a book of good-looking wannabe manga fanart. It's pretty, but it has no soul of its own. I'd much rather read a Korean comic with a style of its own and something fresh to say rather than just a heap of clichés which the Japanese have already done to death (providing there *is* such a Korean comic - I have yet to find one that stands out as more than just wannabe manga). Cyber Weapon Z is so slavish in its copycatting that it almost looks like a parody of a stereotypical martial arts manga. The comic displays a lack of originality which borders on the tasteless. No amount of full-colour art can set that right - and even the art is unsteady. The page layout is often clumsy, the illusion of motion is not handled very well, and the looks of all the characters are strangely incosistent. The Japanese turn out plenty of cookie-cutter formulaic manga as it is. We really don't need a second-rate emulation of the exact same formula yet again, only this time from a Korean pen.