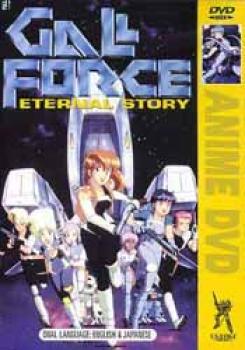 It&#39;s the Solnoids against the Paranoids, and the crew of Star Leaf are caught in the middle. With destruction facing them from either direction, they must strike out on their own and solve the mystery before they forfeit their lives<UL><LI>Audio: Japanese and English<LI>Subtitles: English<LI>Extra features: Character gallery, DVD sneak peeks, Comics page, Song listing<LI>Running time: 86 minutes<LI>Region: All</UL>

Part space opera, part Alien rip-off and part creation theory, the sum of Gall Force, Eternal Story¿s parts is a movie that has something interesting to say, but suffers from clunky execution. Still, it was popular enough in its day to spawn a lot of direct-to-video sequels, forming an entire saga that includes eight further installments (Gall Forces 2 and 3, Rhea Gall Force, plus three `Earth Chapter¿ and two `New Era¿ OAVs). When viewed as a whole, the Gall Force saga paints a powerful picture of epic scope that deals with attempts from a few brave women to safeguard peace and some hope for a fruitful future amidst the folly of senseless, all-consuming wars. Unfortunately, each separate installment of the series is not without its flaws, and it¿s questionable whether it really is worth sitting through every Gall Force film for those effective glimpses of pacifist sentimentality that seem to be the series¿ driving theme.

Eternal Story, the only theatrically-released Gall Force, is where it all begins. The movie follows the crew of the spaceship Starleaf, just one of the millions of ships in the Solnoid space armada. The Solnoids are an all-female race who have been at war with their nemesis the Paranoids for centuries. For all we know, the two races have nothing to live for apart from their ongoing war.
At the start of the movie, the Starleaf gets badly damaged during a skirmish with a Paranoid fleet, leaving only seven crew members alive. Their orders are to head for the planet Chaos, which the Solnoids are planning to use as a new home. It¿s going to be a perilious journey, however, featuring potentially lethal engine trouble, Paranoid attacks and unexpected visitors to deal with. All through this, it¿s gradually revealed that the hapless Starleaf crew are merely being used as pawns in a plot of enormous scope ¿ a plot that may offer the two warring races their only chance at a meaningful future before their futile war ends up extinguishing both races altogether.

The whole pacifist message, the slowly unfolding bigger picture and the `creation theory¿ ending are very interesting elements. Unfortunately, all of Eternal Story¿s strong points are obscured by the generous amounts of cheese that are flung around the screen almost throughout the whole film. There are several attempts at drama that fall awfully flat, and just a few too many abrupt, illogical moments for comfort (for example, a planet that was painstakingly terraformed by the Solnoids can apparently be instantly destroyed by merely having two Solnoid droids plug into some sort of gizmo ¿ you might want to make your custom planets a bit more stable than that if they¿re going to be of any use). The writers seem to think that the right way to make for poignant drama is to insert tacky 80¿s pop songs while flashbacks of events that happened ten minutes ago are being shown. Or by setting dogfight scenes to upbeat light pop music.
A lot of the characters die along the way, but it¿s often hard to care since the victims in question are usually not developed beyond one or two character traits and tend to give their lives for seemingly stupid, needless reasons. But the writers are nevertheless hell-bent on hammering in that this is a Tragic Moment via the aforementioned cheesy methods. Just in case you didn¿t know that death isn¿t funny. Even the death of a shallow, one-dimensional character with garish day-glo hair.
Ardent sci-fi enthusiasts will probably wince at how poorly Eternal Story borrows from well-known sci-fi films. Alien in particular is shamelessly ripped off along the way (right down to Kane¿s funeral scene) and re-created in an awfully cheesy fashion. It all smacks of poor writing, and the badly dated character designs don¿t help a lot either. Now, I have nothing against slightly chubby 80¿s anime designs per se, but the characters are drawn with such lack of detail and clumsy facial expressions in Eternal Story that they¿d be hard to take seriously even if they did not sport lime green afro hairdos.

Despite all that, I don¿t flat-out dislike Eternal Story. Like most Gall Force films, it has its moments (there certainly are worse GF installments, but that isn¿t saying a whole lot), and some of the pacifist ideals do get to the viewer. In the end, the Gall Force series never really soars to greatness, but remains sitting on the fence between failed and inspired moments. It will, however, take a very forgiving viewer to really enjoy Eternal Story in spite of the poor characterisation and clumsy attempts at drama that permeate it.
Note that there has been a more recent, remastered DVD edition of Eternal Story from Central Park Media. I¿d actually recommend that edition over this older one, as the image quality is showing quite a lot of wear and tear in this edition, while it has been partially reworked and improved in the new edition (the older edition also suffers from some rather clunky menus). Even though this may be a flawed film, it¿s nice to see someone treating their older anime titles with some reverence.