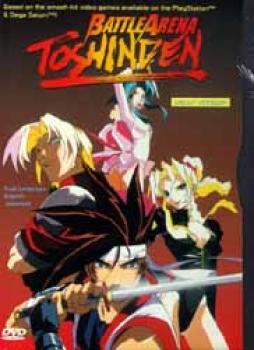 The last Toshin Tournament ended one year ago. Nobody won.

For one year, Master Swordsman Eiji Shinjo has been haunted by the memory of his battle with the renegade champion, Gaia - a battle that was cut short by the forces of the malevolent syndicate known as &quotThe Organization&quot. Denied victory, Eiji left the tournament followed by his opponent&#39;s mocking laughter. Worse still, Eiji walked away no closer to finding his lost-long brother, Sho.
But now, a mysterious warrior is hunting down the champions of the previous tournament and using their own moves against them - and it looks like that person may be Sho.
Who is this powerful, new foe and who will be his next target? Eiji and Kayin - his closest friend and greatest rival - struggle to unravel the mystery before they, too, join the ranks of the defeated. The answer lies at the heart of the Organization and its plans for World Domination. At last, the ultimate battle between the greatest fighters in the world will finally be decided. But if Eiji loses, his friend - Ellis - may die...
Let the tournament begin!<UL><LI>Audio: Japanese, English<LI>Subtitles: English<LI>Extra features: Character introduction/Story background, Promotional trailer<LI>Running time: 60 minutes<LI>Region: All</UL>