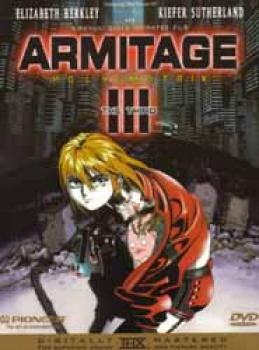 The Armitage III Movie - Polymatrix, features the voice acting talents of Elizabeth Berkley (as Naomi Armitage) and Kiefer Sutherland (as Ross Sylibus), and is 90 minutes of cyber-punk action with a Bladerunner look and a pulsing techno soundtrack.

STORY2179: Mars has been colonized by Earth, populated by humans and Second Type robots - robots designed to perform the menial tasks humans won't do. Ross Sylibus was a cop based on Earth, whose last partner was killed by a rampaging robot. Ross barely survived the attack and is now half robot. When he transfers to Mars, his hatred towards robots will be put to the test as a madman, Rene D'anclaude, begins to massacre the Third Types - illegal humanoid robots designed to look and behave exactly like humans and live among the Martian population as citizens. Ross' partner, Naomi Armitage, has a hair trigger for both her temper and her gun, and a secret: she is also a Third. Ross must confront his biases and realize that being human is more than just being made of flesh and blood to help his partner survive and to discover what sinister force is backing D'anclaude. <UL><LI>Audio: English 5.1 Dolby Digital sound track<LI>Extra features: Production notes, Original theatrical trailer<LI>Running time: 90 minutes<LI>Region: 1, 4</UL>

The text of this item was provided by <a href="http://www.pioneeranimation.com"; target="_blank">Pioneer animation</a>.
Copyright © 2000 Pioneer Entertainment (USA) LP All rights reserved. 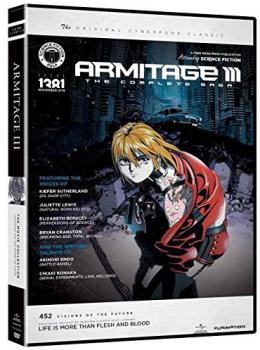