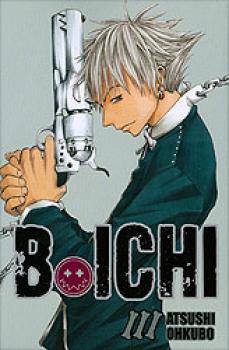 Other items in B.Ichi manga US

The Fear Factory's Fear Robot is wreaking havoc in IC prefecture, and Tool and Shotaro rush to the scene to try to stop it. Shotaro is badly beaten and about to get killed when who should show up but Justice Charisma! Meanwhile, Zuno and Asshi find Mana, who is injured and unconscious from the Fear Robot's first attack. They take her to their boss, Rodigy, who orders them to finish her off. They can't bring themselves to do it, so they decide to sneak her out with the garbage. At the same time, Shotaro and Tool try to sneak into the Fear Factory through the sewer...and see Mana being thrown out with the trash. Together the three of them sneak into the Factory in search of Yohei. They fight their way through robots and minions and eventually find him, but he tells them to not to bother with him. (NoFix has sworn to kill everyone who gets involved with Yohei). But Shotaro says that they're friends, and convinces Yohei to come with them. The group splits up and fights its way through the Fear Factory. Shotaro goes up against Rodigy, as Yohei faces NoFix.