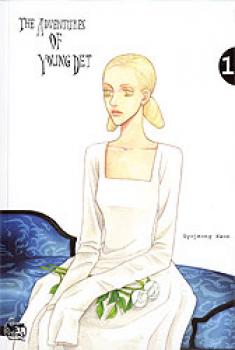 Other items in Adventures of young det manga US

In a medieval kingdom, within a fantasy universe completely unlike our own, they tell the legend of two adventure-loving boys from the countryside who set out on an epic quest to slay a powerful and fearsome dragon that threatened their world.

The tale of the Feramores elaborates the origins of the two heroes Det and Osen as they begin their journey, finding romance and battling their way to glory.

Discover with them the wonders of their world, the horrors that afflict it, and the struggles endured by a new mankind. Live the magic that flows through it all!!

The first volume of The Adventures of Young Det follows the happenings of a young, naturally talented sorcerer, Lazerous. He befriends the leader of the prophetic race of Gaderins, the Ferat, and the two begin studying magic together. The Ferat had a vision in which the dark dragon was released and destroyed the world. In this same vision, she saw Lazarus, suggesting he is somehow involved in the release of the dragon and the fate of the world. The Gaderins believe their prophecies to be unchangeable, but Lazarus isn't quite so sure.

I liked the start of this series for a lot of reasons. First, the art is gorgeous and sets the tone of the series nicely. The artist does facial expressions really well. Also, there's a lot going on in this story and on several different levels. You've got two young adults who share a passion for learning as much as they can about magic and yet are unaware of the bond they are forming. You've got the delicate interplay of politics both within clans and between clans as everyone is worrying over the coming destruction. I also really like the technical detail that the author gives for most of the spells the characters are casting. Some parts feel as though you are reading a magic lesson. It really adds to the believability and depth of the world this book takes you into.

Gyojeung Kwon develops the characters wonderfully in this epic story of magic, prophecy, and the unconscious emotions of youth. I highly recommend it!