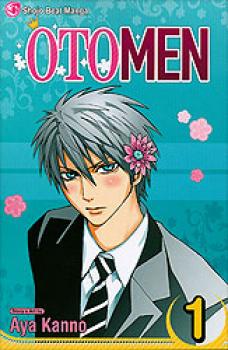 Other items in Otomen manga US

Asuka Masamune is a guy who loves girly things--sewing, knitting, making cute stuffed animals and reading shojo comics. But in a world where boys are expected to act manly, Asuka must hide his beloved hobbies and play the part of a masculine jock instead. Ryo Miyakozuka, on the other hand, is a girl who can't sew or bake a cake to save her life. Asuka finds himself drawn to Ryo, but she likes only the manliest of men! Can Asuka ever show his true self to anyone, much less to the girl that he's falling for? 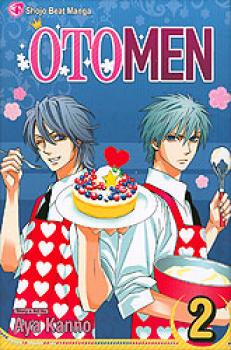 I absolutely love Otomen; it is highly controversial as Asuka seems your typical shoujo hero; tall, handsome, good at sports and not afraid to stop a fight and save the damzel in distress.
But then you see his room. Which contains more pink than anyone should ever be allowed to live in, more cute stuffed animals than in a five-year-old's collection, and more shoujo manga than your average fangirl possesses. And to top it off, he can knit quite well.

And the problem is that the aforementioned damzel in distress, to whom he has taken quite a liking, has actually grown up in a house full of brothers and is quite manly herself, and thus only likes the more... manlier men. What to do?

Upon reading this you are perhaps thinking that this manga will soon grow into another one of those typical shoujo manga, with a corny moral such as "accept everyone for who he is". But really, I don't think Otomen will. Perhaps the moral of the story won't be as original, but the whole story that's woven around it sure is.

The characters are very likeable and not so standard shoujo-types of persons; neither is the plot. You'll really feel sorry for poor Asuka when he has to hide all of his girly stuff from his neurotic mother and the rest of the world and all in all gron to like the characters.

Otomen is a very fun series and not-so-standard-shoujo-schmuck, which you'll grown to love the further you read.