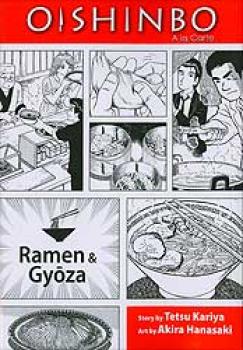 Other items in Oishinbo a la carte manga US

As part of the celebrations for its 100th anniversary, the publishers of the Tozai News have decided to commission the creation of the 'Ultimate Menu," a model meal embodying the pinnacle of Japanese cuisine. This all-important task has been entrusted to journalist Shiro Yamaoka, an inveterate cynic who possesses no initiative, but does have an incredibly refined palate and an encyclopedic knowledge of food.Each volume of Oishinbo follows Yamaoka and his colleagues through another adventure on their quest for the Ultimate Menu. Now, the best stories from the hundred-plus volume series have been selected and compiled into A la Carte editions, arranged by subject.

Noodles are an integral part of world cuisine, from East (pad thai) to West (lasagna), refined (lobster fettuccine) to humble (mac n' cheese). But few noodle dishes evoke as much passion, ignite as much debate, or inspire such loyal devotees as ramen does in Japan. At first it seems like a simple thing: a bowl of noodles in broth with toppings. But as Yamaoka discovers in this volume, sometimes the simplest things are the best--and the hardest to perfect. Starting from scratch, with the flour to make the noodles and the meat to make the broth, he embarks a mission to find "The Soul of Ramen."