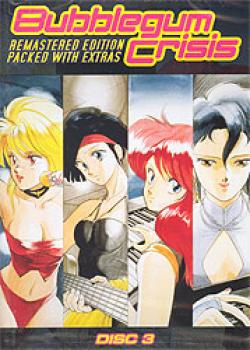 Other items in Bubblegum crisis OAV DVD US Remastered

In volume three of Bublegum Crisis, a mysterious figure named Largo lurks in the shadows, and appears to consider the mighty Genom Corporation to be merely a useful, but disposable, tool.<ul><li>Episode 05 - Moonlight rambler
Five young women die attempting to escape from an orbital colony, and in the resulting mayhem, a highly advanced combat suit goes missing. Meanwhile, a "vampire" seems to be preying on the citizens of MegaTokyo. As the AD Police and the Knight Sabers converge upon the truth, the resulting conflict triggers a countdown to nuclear destruction.</li><li>Episode 06 - Red eyes
The Knight Sabers have gone bad! They've attacked a Genom warehouse, murdered the guards, and stolen a valuable container of combat Boomers. Framing the Knight Sabers is just a small part of the twisted plans of the mysterious Largo, and their ultimate, humiliating destruction is just a matter of elegant necessity.</ul>115 minutes 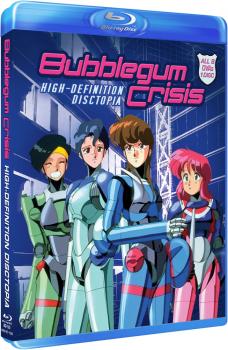