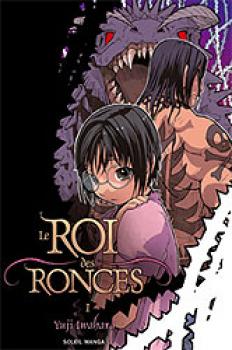 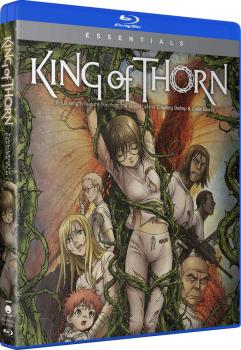 'Roi des Ronces' starts out as a mysterious disease called 'Medusa' is decimating the Earth's population. A handful of Medusa's victims are chosen to be cryogenically frozen, and hopefully to be awakened when a cure is found. Among them is our protagonist, a shy and downtrodden girl called Kasumi. When she and her fellow sleepers wake, however, all is not as they expected. The facility where they were frozen is abandoned, everything is covered in giant, thorny vines and bizarre, mutant dinosaurs are on the prowl. And on top of that, everyone is still suffering from the Medusa virus. Kasumi and a small handful of other survivors have to fend for themselves in a strange, hostile world, and figure out what has happened during their slumber, before the virus takes control and brings about a swift, inevitable death.

And that's just the first few chapters. 'Roi des Ronces' truly hits the ground running, and for the length of its first volume, it never quite stops to catch its breath. The characters are in constant peril, be it from marauding dinosaurs, tumbles into a raging sea, or the ever-present threat of the virus. So there's plenty of tension, but it leaves little room for anything like refelction or character development... so far. There are glimpses into Kasumi's inner turmoil, and some of the other survivors obviously have hidden agendas of their own, but we don't even find out the names of most characters during this volume. Because before we can dwell on that too much, everyone finds themselves forced to run from another threat.

Still, I'm curious to see where the series will go from now, and what will become of the subplots that've been hinted at so far. Say what you will about 'Roi des Ronces' it certainly isn't dull. I also rather liked the art. I'm usually easily put off by the kind of stark, angular art that seems to be all the rage in manga at the moment, and 'Roi des Ronces' looks stark and angular with a vengeance. But it actually works here, lending a clear, dynamic flow to the action, and it never ends up feeling like the 'stylised' look is just a cover-up for laziness on the artist's behalf. It's stylised art used right, for a change.

I hope 'Roi des Ronces' will flesh out its plot a little more in further volumes, but I also wouldn't mind some more mutant dino-chases if they continue to be executed well. What I've read so far is good enough to leave me wanting more, and that's exactly what a good first volume should achieve.