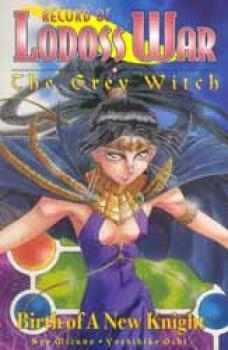 The second graphic novel in the fan-favorite Lodoss series, one of CPM&#39;s top-selling manga and video series! All of your favorites from the cursed island of Lodoss are back for more adventures: Deedlit the Elf, the Hero Parn, Ghim the Dwarf, Etoh the Priest, and the beautiful and dangerous Grey Witch, Karla! This is a thrill-a-minute story, opening with the kidnapping of the beautiful Princess Fianna of Valis, a battle with an army of undead skeletons raised by the Grey Witch, and an incredible battle between the heroes and the Grey Witch herself, when she transforms herself into a giant black bird! It&#39;s also a moving story, as Parn finds out the truth about his late father, and comes to accept the unfair disgrace and true heroism with which his knightly sire died! This is one graphic novel you don&#39;t want to miss!