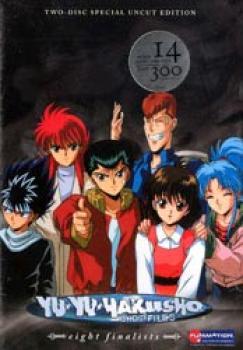 Demons from the past greet demons from the present, as Yusuke, Hiei, and Kurama take their places at the sides of the three kings of Demon World. Yomi has forced Kurama to serve ashis advisor. Mukuro throws Hiei into conflict with the demon that implanted the imp's Jagan Eye! With Raizen's time drawing to an end, Yusuke must act fast to keep the tenuous peace in Demon World. As Mukuro and Yomi prepare their next move, Yusuke arrives at a brillaint decision that might preserve the calm.

Yomi and Mukuro, preventing a full-scale Demon War, have embraced Yusuke's unlikely proposal of a tournament to decide who will be the ultimate king. As the main bouts of the Demon World tournament get underway, some of the best and most familiar fighters are removed rather quickly. Wile it looks like some of the fighters' motivations for entering aren's exactly what they seemed, they all have their eyes on one warrior as the prize...Yusuke. Urameshi finds himself staring down Yomi. Who emerges victorious? When the dust settles, surprise follows as one by one each member of the old gang shows up...But where is Yusuke? A saga for the ages ends with a kiss...In the thrilling conclusion of Yu Yu Hakusho!<UL><LI>Episode 99 - Haunted by the past<LI>Episode 100 - The secret of the Jagan<LI>Episode 101 - Reunion of the bandits<LI>Episode 102 - Torn between identities<LI>Episode 103 - Inheritance<LI>Episode 104 - Every demon for himself<LI>Episode 105 - The preliminaries<LI>Episode 106 - The battle of father and son<LI>Episode 107 - The demon world tournament begins<LI>Episode 108 - Farewell, Kurama<LI>Episode 109 - Love and war<LI>Episode 110 - A reason to fight<LI>Episode 111 - Closure<LI>Episode 112 - To the future</UL> 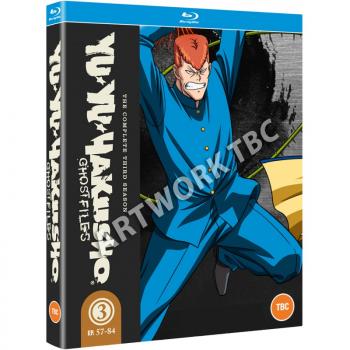