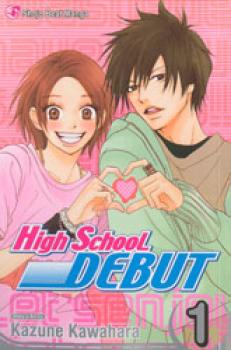 Other items in High school debut manga US

After blindly following the advice of fashion magazines and the like, Haruna fails to win the eye of any guy. Convinced that a coach is needed (just like when she trained for softball), she recruits cute upperclassman Yoh Komiyama to instruct her on how to make herself more appealing. Yoh agrees, with one catch: Haruna had better not fall for him! 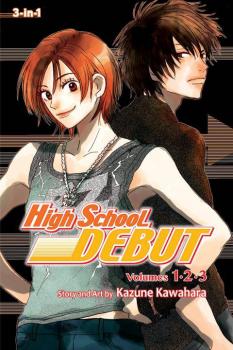 High School Debut. So the titel already tells half of the story.
It is, of course, about a girl that wants to get a boyfriend when she is getting into high school.
The story is a pretty typical shoujo story, and ofcourse I will explain. The main character, is a girl named Haruna, who is energetic and can achieve a lot if she puts her mind to it. She is determined to get a boyfriend when she is in high school and is seriously trying to get to that. She is trying a bit too hard though. The main character boy, Yoh is going to be her coach for that. He also has the girl experience, and a trauma as well. Everything is very shoujo.
The thing that made me gave this series 3 stars is the fact that it is hilarious. The character design is overall good, and the art is good too, I don't find it spectacular, but it is something you should have read.
The enjoyment of this series is mainly because it is very funny and not because of the story, but it is still good.
Overall I think you should've read it, and you can like, you can dislike it, if you dislike it you probably don't like shoujo, but that is still okay.

An awesome shoujo-series with great art that'll make you want to read the second volume right away!

I really like this manga. The characters are funny and the story stays interesting until the last page. Can't wait to read the next volume.

This manga is just G-R-A-E-T.
If you like shoujo manga and a funny love story. This manga is definitely something for you.
It's about a girl Haruna who's just started high school and she wants a boyfriend. She never actually paid attention to her looks and how to attract boys before. So she's a complete loser at it. She decides she has to have a coach who can train her like her softball coach to be actractive to men. She thinks Yoh is the perfect match as her coach but he has some conditions she has to accept before he wants to be her coach.

What I especially like about the characters is that they are so realistic and you can compare yourself with them. In this case I could really get into Haruna. Because she spent most of her time in middle school training for softball she has a quite muscular appearance. Like her arms are muscular and yoh tells her she shouldn't show them too much because they scare away the men.

I also like the art. Yoh is a true hottie(ofcourse >

whaaa!! i love this manga!! it was really funny, Haruna is so much fun. and that Yoh person is so HOT!! the other characters are awesome too. really love them!! the story is very cute and romantic. this really is a shoujo romance manga. the art is ok, just like what you see on the picture
at the beginning it irritated me that a friend of Yoh always blushes. but after you learn his caracter you understand. so it's ok now. this is the only negative thing i can think of. imagine how great this manga must be :P
I cant wait for the next volumes!! really a must have for all shoujo lovers!!!