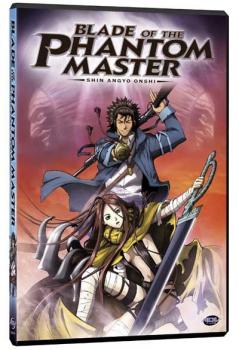 Long ago, the legends say, there was a secret army. Unseen until needed, these warriors struck from the shadows, protecting justice and defending the Jushin Empire from both tyrants and thieves. They were called the Amen Osa, The Phantom Masters.

But now Jushin has fallen, its kingdom destroyed and its citizens left to the mercy of zombies, beasts and sadists. Yet from the ashes of destruction, a hero has appeared to defend the people. His name is unknown, and no man knows who he serves... But there are clues: the strange symbol he wears around his neck and the female living weapon he commands. Is he the last of the Amen Osa? The answer will be revealed, when the Blade of the Phantom Master is unleashed!