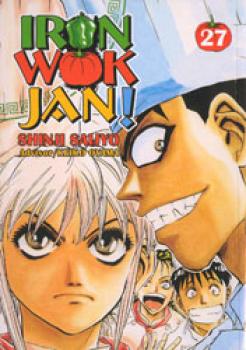 Other items in Iron Wok Jan! manga US

After Jan reveals his unspeakable ingredient too sickening even to be mentioned on the back cover, the ostriches go wild turning the competition site upside down. But, don't worry. There is still one battle left. Don't miss the final battle as the cooking battle saga of the two houses Akiyama and Gobancho closses its curtain after three generations.